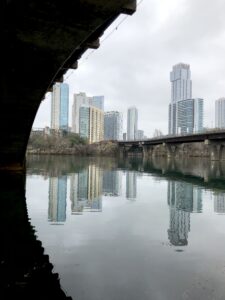 The bigger Austin becomes, the more the flight path needs to be considered for homebuyers. Historically, a net gain of more than 100 residents a day, would mean longer commutes from Austin traffic to get to the office or even just the grocery store. After all, more people mean more cars, which lead to more traffic; all the result of a population increase. Now, throw a pandemic into the mix and you’ve got an outlier that skews the data.

Anyone who has worked with me or been a long-time reader has heard my stories and my analogies. You know the analogy about the line at the grocery store and heard how buying a home is like dating. Have you heard the commuting time speech recently? Probably not, because it has been a work in process for the last two years. Residents who haven’t lived in Austin for the last 3 years, don’t have a comparison for traffic patterns right now.

I can’t say current traffic patterns are the ‘new normal’ because the concept of ‘normal’ is very fluid right now.

For some Austinites, the water cooler is the home refrigerator

There are three types of workers right now. Those that are solely working remotely, others are on a hybrid schedule going to the office twice a week, and some that go into work every day. That cocktail of people did not exist in relatively equal measure 3 years ago. When that ratio is going to change is really anyone’s guess. The point is that it will change and traffic along with it.

In this world, nothing can be said to be certain, except death, taxes, and Austin traffic

Known certainties like death and taxes famously pointed out by Benjamin Franklin, can be extended to Austin Traffic.  Traffic has historically been a challenge in Austin. Google away and you’ll find Austin has been consistently in the top 10 for traffic amongst cities for a decade. Understand, a decade ago Austin wasn’t even considered that big of a city and still made the top 10.

Austin is in a constant change

New Austinites should be mindful that just like anything from flood zones, schools, taxes, even commuting times can change. I don’t have a crystal ball. I don’t know how much things are going to change and when. As the net gain of residents continues to increase, Austin is in a constant state of change even without a pandemic.

For buyers, the best advice I can give is to be open but mindful that a 30-minute commute today may have been an hour 3 years ago and may very well be again someday. You may be confident you will still be on a hybrid schedule, and may not care or you might. One thing is for certain, all of these huge business campuses aren’t being built to stay empty and at some point, everyone is going to need to leave the house for milk.