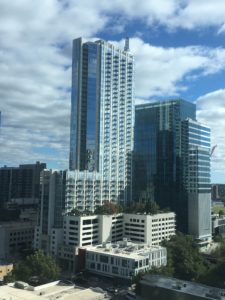 Built between 2007 and 2008, the 360 Condos tower is conveniently located near the Seaholm District, the Central Library, and Shoal Creek Trail.

What amenities do 360 Condominiums offer?

360 Condominiums is located in the heart of downtown Austin, Texas.  It has 44 floors and houses 430 units.

360 Condominiums for Sale in Austin Texas

There are plenty of homes around the Austin downtown area that provide urban convenience with a larger buffet of living styles.  Check out my Central Austin and East Austin pages to look at more houses for sale and read about other neighborhoods.

About living in Downtown Austin

Centrally located, downtown Austin houses the business district, fine dining, and an eclectic mix of entertainment venues.  At its heart is the capital building, but music provides the soul and spirit that Austin Texas is known for.

Austin luxury condominiums and lofts fill the main roadways, while historic Victorian and early American homes, showcasing old-world elegance and charm, can be found nestled along secondary streets.  The appeal of downtown Austin is in its unique blend of modern touches and tradition coupled with a mix of opportunities for work and play.

Residents who live downtown seek an urban lifestyle, with all of the convenience it offers.  Austin happens to include a neighboring park, lake, and running trail which is why it is often called ‘the city within a park’.