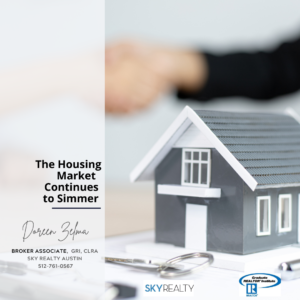 Simmering doesn’t mean cooling, it just means it’s not boiling. The best analogy of the real estate housing market for the past 2 years is that it was boiling over, which manifested in the common use of the Addendum concerning the right to terminate due to Lender’s Appraisal, commonly known as ‘the appraisal waiver.’

It may not be a buyer’s housing market, but Homebuyers can now shop more

Buyers going over list price, month by month have become less of the norm. Again, markets are hyperlocal, every home that sells is based on what a buyer is able, willing, and ready to pay. I ran a closed report on August 16th for all homes in the Austin Central Texas MLS that closed in the last 30 days in Leander, and of the 154 properties that closed, 119 sold over the list price. I ran the same report for the city of Austin, and of the 840 properties that closed, 201 sold over list price.

Even when the pot is simmering, it’s still on the edge of boiling at any point, which is exactly what we are seeing in the market now. Price decreases are abundant because the market isn’t boiling over. Buyers aren’t ready, willing, or able to go over for just anything. More inventory means more choices. More choices mean less demand.

Units are Down, Year over Year Sales Prices are Still Up

The housing market isn’t cooling either when considering year-over-year median sales prices are still up. A buyer may not be paying over list routinely now, but they are still paying more than they were a year ago.

The Market has Reached a Peak

Right now the Austin real estate market has reached a peak. Is it the peak, where we are going to start heading down? Or, are we going to start climbing a new mountain? If too many sellers leave the market because their homes are not appearing in enough buyers’ dreams – supply will go down. On the flip side, if too many buyers enter the market because interest rates are favorable, the selection is up, the weather gets more enjoyable to look at homes or the kids are no longer underfoot – supply will also go down because demand will have gone up.

For now, we will simmer at the peak.